Coronavirus lockdowns in the U.S. dramatically impacted quarterly claims and losses in the first half of 2020. Earned car years, however, continued to grow.

The latest available Fast Track Monitoring system data from the Independent Statistical Service Inc. (ISS) quantifies the historic impact of coronavirus lockdowns on private passenger collision claims and losses during the second quarter of 2020 compared to the previous year. 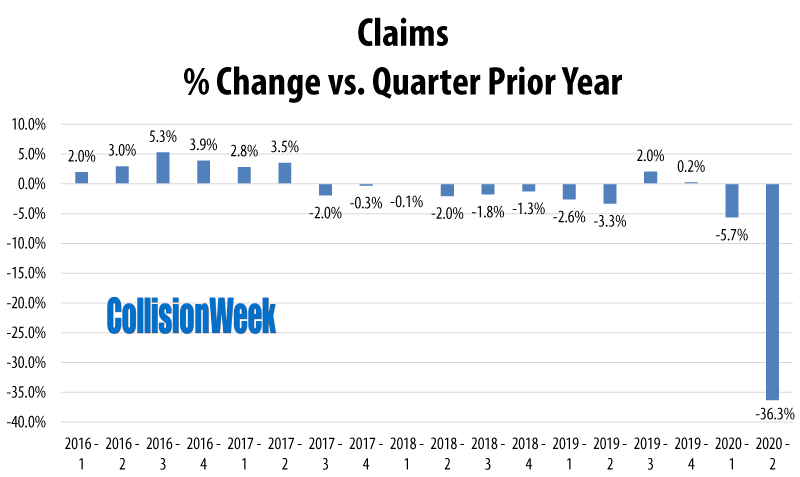 For the year ending on the second quarter of 2020 collision claims were down 9.7%, a decrease of 9 percentage points from the year ending in the first quarter that was down 1.7%. 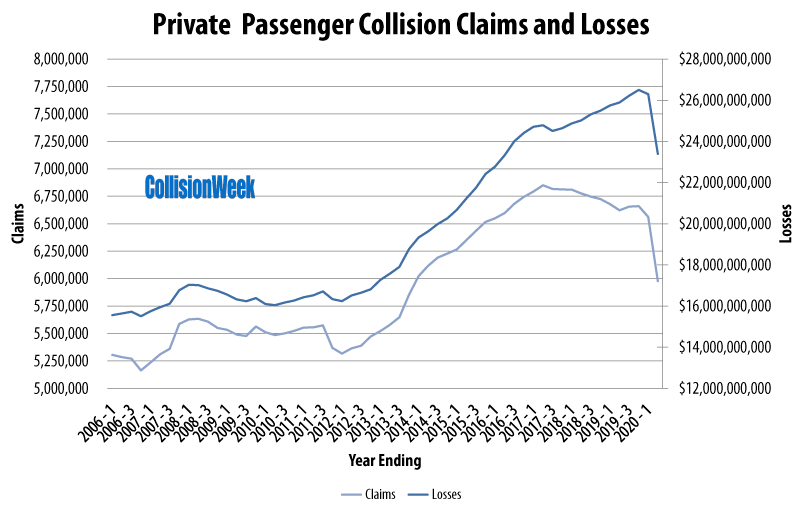 The number of collision claims had grown in every quarter since 2012 on a quarterly basis compared to the previous quarter until the third quarter of 2017.

The third quarter of 2019 marked the end of quarter-on-quarter declines on a year ending basis after seven of the last eight quarters declined versus the previous quarter with one flat quarter.

It is important to note that the $23.4 billion in losses for the year ending in the second quarter of 2020 are for just private passenger physical damage collision coverage and is a proxy for the growth in the overall collision repair market.

Including both insurance and customer pay in the U.S., CollisionWeek estimated revenue exceeded $48.8 billion for the industry in 2018 with more than $44.7 billion at both independent and OEM dealer employer firms.

There were over 584,000 fewer collision claims in the second quarter of 2020 compared to the previous year. This comes on the heels of the over 97,000 claims decline in the first quarter compared to 2019.

While claims and losses declined substantially, programs by insurers to provide credits and refunds on premiums, and not cancel insurance while stay at home orders were in place, buoyed earned car years that were up 1.5% in the year ending in the second quarter of 2020 compared to the same period the previous year.

The earned car years statistic provides an important measure of the size of the insured vehicles in operation that is a critical component for collision repair volume. While car sales declined substantially when many areas of the country closed dealership new car sales departments, since then sales have recovered and have exceeded previous year levels in recent months. 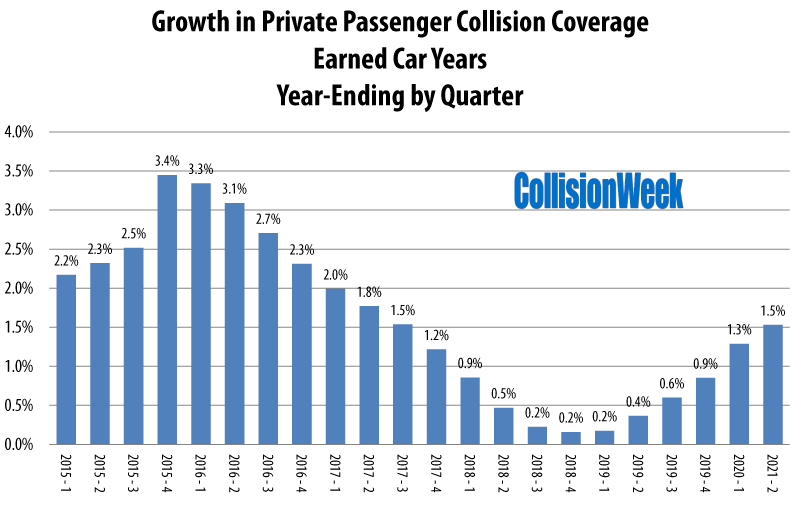 The growth in earned car years for private passenger collision coverage had been declining since its most recent high in the fourth quarter of 2015. Earned car years has now seen five straight quarters of increasing growth on a year ending basis.

Tracking the health of earned car years will be critical as insurance company customer payment relief programs expire and the burdens of higher unemployment during the pandemic force consumers to reduce vehicle ownership and their insurance coverage.

Monthly claims statistics published by CCC Information Services indicate that repairable claims in the third quarter and first month of the fourth quarter continue to be substantially below year ago levels across most areas of the country.

Join our newsletter to stay informed with new member programs