A larger percentage of collision repair facility operators responding to the most recent Collision Repair Business Conditions survey covering January reported that sales were up, but the amount of increase was less than reported in December. The shop-size weighted sales comparison to last year declined for the month as the effect of January’s relative strength last year, before the pandemic began, impacts the year-on-year comparisons.

Respondents had expressed optimism that the year-on-year January sales would improve compared to December, but the increase in state travel restrictions coupled with fewer commuters on the road during the winter season appears to be impacting the typical winter increase in business.

Respondents reporting higher sales in January increased to 12.1%, up over 3 percentage points from 8.7% in December, but down from 17.8% in November. The January result was up from 10.5% in October and down from 19.1% of respondents in September. The January result is the fifth lowest result since the major decline in April following the imposition of stay-at-home orders beginning in March.

The January result remains below the 23.6% of respondents who reported higher sales in March.

The final January result is an improvement from the 38.4% decline in sales reported by respondents in May compared to the previous year that represents the low point for the industry since the pandemic response started in March. 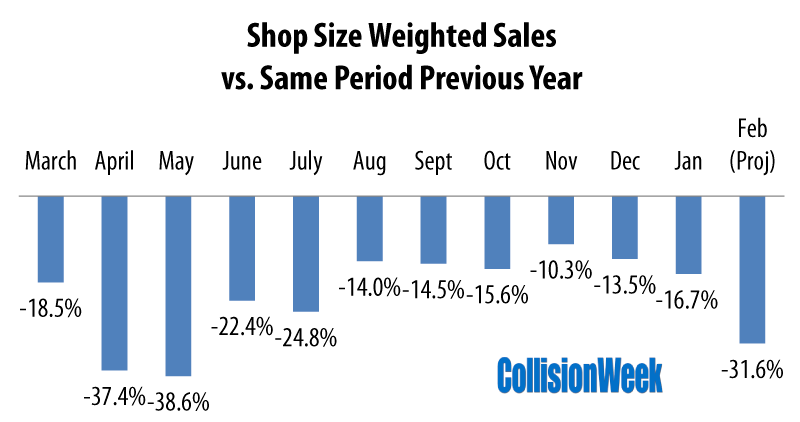 The return of winter weather in many markets influenced work levels for repair facilities that reported higher sales in January compared to last year.

The traditional increase in collision repair volume associated with winter weather snow and ice events is being muted this year by the large number of office workers that remain working from home all or part of the week.

On days with severe weather predicted, many commuters who have returned to the office can take advantage of the increased ability to work virtually by taking a snow day and staying off the roads.

For the seventh month in a row in our research we asked respondents to give us a projection of if they believe their sales would be up or down and by how much for the current month compared to the previous year.

Overall, on a shop-size weighted basis, respondents to the survey conducted February 3-17 for the first time had a decidedly negative view of sales for the month, projecting a decline of 31.6% compared to February 2020, nearly double the reported January decline.

Comments from respondents who projected larger declines cited that the comparison to February 2020, the last month prior to the start of the pandemic in the U.S., was unfavorable and concerns over winter storms in much of the country impacting both repair facility open days and traffic volume.

Prior to February, respondents consistently had a more positive view projecting current month sales compared to last year over the decline reported for the month that had just been completed.

Two-thirds of collision repairers, at 66.7% continued to report lower earnings in January compared to the previous year. This is an improvement compared to 71.0% in December, but a deterioration from 65.3% in November. January was down from 68.4% of respondents in October that reported declines, but up from 64.5% in September and 60.4% in August. The result is a slight improvement from 71.4% who reported declines in July. Fully 67.3% reported lower earnings in June and the record was 77.9% that reported lower earnings in May compared to the previous year. In our quarterly Business Conditions studies that began in 2001, the previous record was 62.5% of repairers overall reporting lower sales in the third quarter of 2009 versus 2008 in the midst of the Great Recession.

Given the concerns about sales and earnings, the employment picture was just slightly better for the month. A smaller percentage of respondents, at 13.7% reported a decrease in the number of employees at their location, down from 20.3% in December and 24.7% in November, 22.7% in October and 28.6% of respondents reporting a decrease in the number of employees in September. The result had been at its lowest point in October since May when business began to recover from the pandemic shutdowns in March and April, so the January result indicates continued progress at recovery.

Those collision repairers that reported an increase in employees, however, decreased to just 0.2% a record low, from 5.8% in December and from 9.6% in November. January’s result is also down from 6.7% in October and 7.9% in September but up from 5.4% in August. In our previous studies, 51.8% of respondents had reported they had laid off employees in March and April.

Several respondents indicated that having cut staff during the pandemic, they increased staff as they traditionally would in preparation for winter, but paused increasing due to the lack of work.

Looking at unfilled positions, 39.5% of respondents reported having positions that they have been unable to fill for more than one month, up from 36.2% in December and from 37.0% in November, 34.2% in October and from 39.7% in September The January result is above the historical average of 26.1 percent recorded since we began including this question in 2001. The result is down from the fourth quarter of 2019, prior to the impact of the pandemic, when 49.5% of respondents overall indicated they had positions they were not able to fill for more than one month.

Those repair facilities that indicated they planned to layoff technicians totaled 5.6% in February, down from 6.1% in January. Those indicating planning layoffs were just 1.5% in December, down from 5.3% in November, 3.3% in October, and 5.6% in September. Those respondents that said they had no plans to hire or layoff technicians in February totaled 78.6%, up from 68.2% of respondents in January

Collision repairer optimism continued to improve in February but has softened since August as the pandemic drags on.

Asked if business would be better in six months, nearly a half of respondents at 47.9%, said yes, up from 30.4% in January, 17.4% in December and from the 44.7% in November who said yes. The February result, however, was down from 50.1% of respondents who said yes in our October survey. The February result is up from 45.7% in our September study, down from 55.1% in our August study and down from 53.6% in July and the record 64.1% of respondents that said conditions would be better in our June study. The previous record was 47.6% who expected better conditions in our third quarter study in 2003.

The percent of respondents who said business would be worse in six months decreased for the second month in a row to 16.7% of respondents, down from 18.8% in January and down from the record 53.6% of respondents in December. The result however is up from 14.5% in November, from 8.1% from October, and 15.2% in our September study. The February result is above the average of 14.1% since 2001. The previous record was 35.4% in the first quarter of 2008 in the early stages of the Great Recession.

Those with a negative view of business continued to cite economic and tax policy changes in Washington, D.C. that may slow the recovery from the pandemic driven recession. Concerns that the expanding coronavirus case counts themselves would not be under control in the near term continued to be the next largest factor.

The declining optimism about business conditions continues to weigh on collision repairers’ views on the opportunity to expand in our most recent study compared last month. Asked if the next three months would be a good time to expand, just 16.7% said yes, up slightly from 15.9% in January that had been the lowest level since June. The February result is also down from 20.1% that said yes in December, from 17.3% in November, 32.3% who said yes in October, 19.6% in September, and from 24.4% who said yes in our August study, 32.1% in July and the 16.9% of respondents who said yes in June. The February result is below the average of 22.1% in our quarterly surveys conducted since 2001. 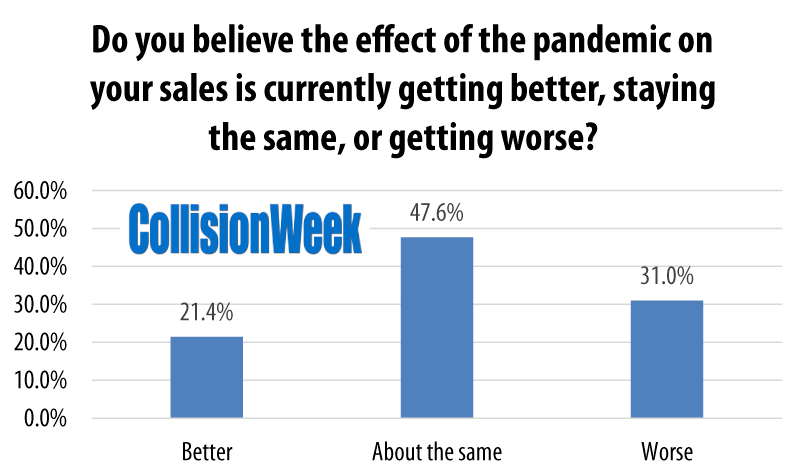 Join our newsletter to stay informed with new member programs